The big apple, the concrete jungle, the city that never sleeps, the empire state…New.York!

This last weekend I was able to explore yet another city I had yet to visit. However, my weekend in New York was for a very special occasion.

Just a little over a month ago, we crowned the new Miss America. This incredible woman just happened to be my roommate and good friend, Kira Kazantsev- Miss New York. Each year the state board of the winning girl hosts a homecoming to celebrate her and her accomplishments. So, this year’s homecoming was obviously held in NYC- for the third year in a row- and I was so very fortunate to be invited to join in on the festivities.

I arrived on Friday for a cocktail party at the ABOVE on Staten Island. I was so excited to see 14 of my Miss America sisters, including Kira.

Other than some scrumptious snacks and an incredible view of several different boroughs, we heard from Kira about her year thus far and watched as the new New Miss New York, Jillian Tapper was crowned. 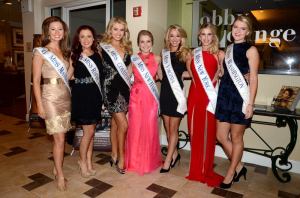 The following day we started our morning off with brunch at Wagner College. The Gamma Pi chapter of Alpha Delta Pi hosted the event for us. Here, we heard from Kira about her platform, Jillian- who was a ADPi at Florida State University- and the president of Gamma Pi’s chapter. 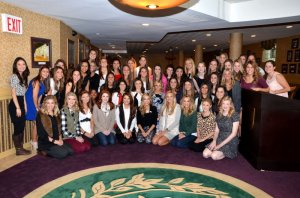 But, our adventure didn’t stop at the 86th floor. For a little extra, participants can travel 14 stories higher to experience an even better view. This level is all enclosed, so my fears had subsided…or so I thought.

Our tour guide then asked, “Who would like to go up just one more floor?” As she asked, she opened a door with what I could only describe as a sketchy set of stairs.

This was a once in a lifetime experience and one of my even bigger fears is allowing an opportunity to pass, so I just couldn’t say no. With a big gulp, I swallowed my fears and ascended the steep ladder like stairs.

At the top of the stairs was something like a control room and a single door leading outside. Yes, this level allowed you take a step outside the enclosed area and into the open air. The railing was the only thing separating us from the ground…103 stories down.

After returning to the safe ground we freshened up and got ready for the night. Our next adventure was a dinner cruise on the Hudson River. Here, I was able to reunite with even more of my Miss America sisters!

The views from the river were stunning and the weather wasn’t too shabby either- minus the wind. We sailed passed the city skyline, under the Brooklyn bridge and got up close and person with Lady Liberty.

I have taken dinner cruises in Seattle before and the beautiful glow of the city lights reminded me of home. However, the sight of the new Freedom Tower, the Empire State Building and the Chrysler Building made it an exciting sight to be seen. 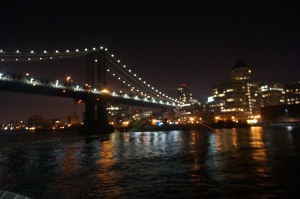 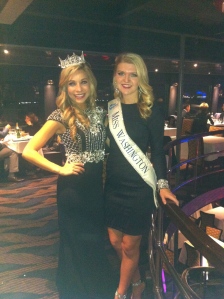 When we got close to the Statue of Liberty, the most patriotic music you can think of erupted from the boat’s speakers. We’re talking Ray Charles’ version of “America the Beautiful” and Whitney Houston’s rendition of “The Star Spangled Banner.”

Needless to say, it was hard not to sing at the top of your lungs and feel like we were alive. 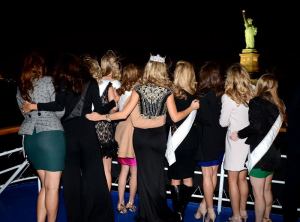 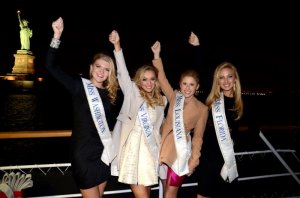 Early the next morning, the girls and I got up to explore some more of the city. We started off at Chelsea Market in the Meat Packing district. This reminded me of a more organized version of Pike’s Place. Instead of fish and flowers, they sold jewelry and other accessories.

We then walked up to The High Line park- a man made park above the streets- and then over to Union Square.

We were all dressed up for the day and in were in such a large group that we should have been surprised when a woman passed by and said to her guy, “well, I guess the real housewives of New York came out today.”

We all had a good laugh about it. 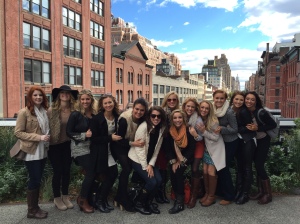 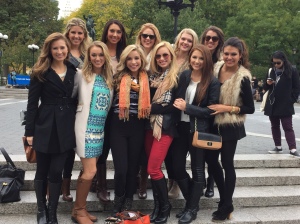 Kira took us to her old stomping grounds for brunch. Before capturing the crown, she was a waitress at an adorable restaurant called Harding’s.

It was a blast from the past next, when we then toured the Intrepid Sea, Air and Space museum. There were planes from as early as the 1940’s. Also, inside this massive aircraft carrier was the US Enterprise space shuttle.

My favorite plane was one featured in Top Gun. It took me back to Miss Washington week and the Danger Zone. 😉 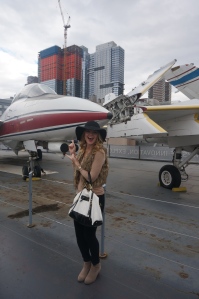 Several of us were starstruck at our next stop. Too bad the stars were entirely made of wax. That’s right, we were at Madame Tussaud’s wax museum. We saw everyone from Brad and Angelina to Maya Angelou and Babe Ruth.

My fangirl fantasy came true when I could take a picture with N’sync and the Jo Bros. 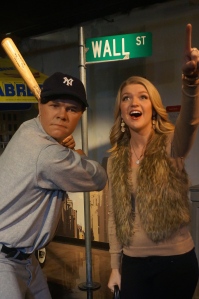 The iconic Time Square was our second to last stop. It was absolute madness. When you walked, it had to be with a mission because people were walking in every other direction.

When we finally got to the red bleachers in the heart of TSQ, all of us girls got in a line and started to take pictures. Again, we were all dressed up and taking up quite a bit of space in our line that I think people started to assume that we were “somebody” because they started taking pictures of us too.

This was maybe my favorite site-seeing spot. The lights and chaos made it so exhilarating.

However, our finally stop of the trip was my favorite event of the weekend. The girls and I got to see the final showing of “Pageant: The Musical.” This hysterical show is a play on pageant stereotypes and in the end the audience gets to pick the winner- so it changes every night and the actors don’t know who will win. Oh, I should also mention that the entire cast are males. Wow! These guys can sing and dance…in heels, so I give them major props.

We ended the night with some fabulous New York pizza and said our goodbyes. It was a wonderful reunion while it lasted and it was so fun to celebrate Kira!

I wish her nothing but the best this year! Also, please help me in welcoming the new incredible Miss New York, Jillian Tapper! She makes an awesome addition to our class.

*A huge thank you to Linda Carbo for arranging the entire weekend and to Julius for taking some incredible photos!