This evening, I had the pleasure of being a volunteer for Taste Spokane. This is an event run by the Wishing Star Foundation in Spokane, who help grant wishes for sick children in the area. My job for the night was to accept donations and tell the guests about the awesome child we were raising money for. The evening was all about a 8-year-old boy who has a very rare skin disease, almost making his skin like paper. The official term is Epidermolysis Bullosa. Samuel loves the weather, so for his wish the Wishing Star Foundation is sending to Oklahoma. Here, Samuel will not only be in the weather capital of the world, but he will also have the opportunity to meet the cast of Storm Chasers on Discovery Channel!

Taste Spokane, for those who don’t know, is an event in which restaurants, bakeries, breweries, etc., come and share samples of their products. Each sample is one token, and all of the money raised from buying tokens goes back to Wishing Star. Of course, I had to do a little tasting too! I mean, I was in a room full of decadent food…My favorites were the bundlets from the new bakery in Spokane called Nothing Bundt Cakes (get it? it’s puny!) and the slice of meaty heaven I had from Toby’s BBQ.

(Owner, Doug and I at the Toby’s BBQ booth.)

The following morning, Hannah, Ashlee and I rode in the very spirited St. Patty’s Day parade. Our beautiful blue mustang took us downtown near Riverfront Park, the Irish bar- which was heavily populated for the event-and then rear the Spokane Arena.

Other parade participants include the Lilac court, the Spokane party trolley, several civic groups and the Spokane Seahawkers- who had this awesome float! Trade you?!

Later that day, Elaina, Jenna and I attended Miss Deer Park. This is a different system from the Miss America Organization (MAO), but equally as cool. Differing from MAO, the girls must be a junior in high school, so they can represent Deer Park and the rest of the community their senior year. The contestants were judged on presence and composure, creative and performing arts and fitness.

Congratulations to the new Miss Deer Park, Kelli Hughes and to the two princesses, Kelcie Lenz and Joanna Goodner. 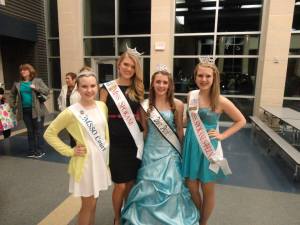