Ne Hao! Last night I returned from my first trip overseas and one of the most unforgettable weeks of my life. Please enjoy as I recount my favorite adventures in Shantou, China. 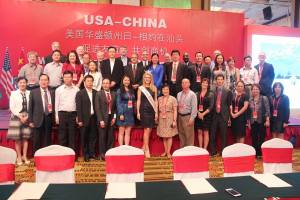 My favorite appearance of the week was our trip to Shantou Welfare Community Center. Here, the government houses and cares for elders and young disabled children who have been abandoned. While heartbreaking, it was incredible to see the smiles on all of their faces when the Washington state delegation entered the room. I took a liking to an 11-year-old boy with down syndrome who held my hand, walked me around the playground and told me I was beautiful over and over again. 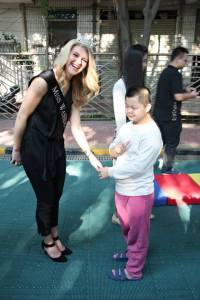 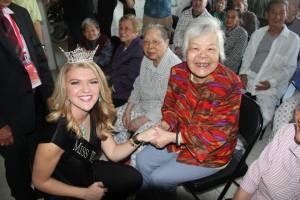 The next day we took a trip to Nan’Ao Island. We stopped at several places, but the one that sticks out to me most is visiting one of the most prestigious primary schools in the Shantou province. Fifth-grade students had prepared questions for the the Lt. Gov. and me in english. Between the two of us, we got asked about food, sports, and hobbies. Then, one student stood up and asked me “Do you like peace?” After realizing that he wasn’t saying peas, I laughed to myself and answered,”Oh yes! World peace!” This is the only instant when I believe that answer was truly acceptable. We then went outside where we found students filling the balconies on all five levels of the schools. There was constant screaming and waving and for a split second I felt like Taylor Swift waving to her adoring fans. It was one of the best feelings. 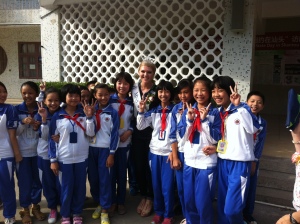 The reason I had been asked to go to China is to have the opportunity to stand on the main stage and present to about a hundred people about Washington state’s agriculture. I learned a lot in the process of preparing for the speech and got to share with the people of China just what makes my beloved state so great and unique.

Finally, when returning yesterday, our tire hit a screw and a nail. This halted our trip for an hour, but I got to know our Lt. Gov. more and take in some final moments of sun and China scenery. 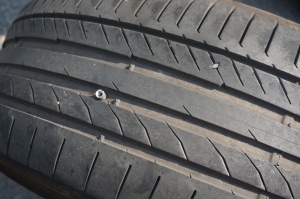 Food, in itself, was quite the experience. Before leaving, I was warned that chicken feet were a delicacy. So on day 1 when I was offered a foot from our feathery friends, I sucked it up and gave it a whirl. I was actually surprised to find that it tasted like chicken and brown sugar. It wasn’t terrible, but it won’t become part of my daily meal. Another interesting dish was goose liver. This one I was not a fan of. Some of the foods I really enjoyed, however, include chilled mango soup with dragon fruit and watermelon and pumpkin soup with garbanzo beans and rice. Now, while I could try and explain to you all of the food I tried, I took pictures to hopefully give you a better visual.

Oh! But I did try Mcd’s and it tasted almost exactly like our beloved golden arches. However, instead of selling apple pies, they sell taro pies. It’s a purple and is a bitter sweet root. Since I have such a large sweet tooth, I think I’ll stick with apple! 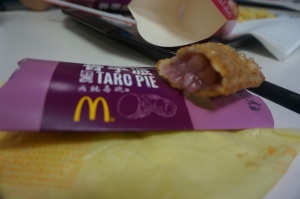 This was my first trip to China and I really had no idea what to expect when it came to how it looked. Hong Kong was very westernized and reminded of any other big city, except the fact that it was originally owned by the British, so they drive on the other side of the road.

Then as you travel further into China, you see A LOT of farms and crops. This scenery always reminded me of something out of a movie. The area we were in was pretty mountainous and had a lot of greenery. 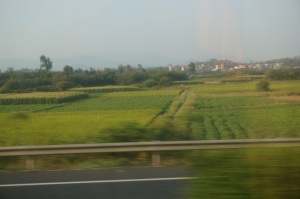 The city was packed and there were cars and vespas flying every which way. Although there were a lot of buses, I don’t think I once saw an SUV. It is typical for doors and windows to have what look like cages over them and laundry hanging from them. 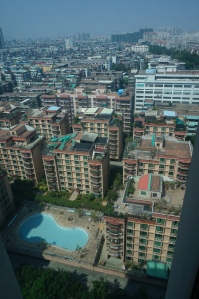 Nan’Ao is beautiful and slightly reminded me of Hawaii. Because it is positioned on the Tropic of Cancer, it is a tropical island with sandy white beaches, lush green mountains and unique flowers sprouting through the greenery. The bays were full of both traditional and historic looking fishing boats. The streets were paved, but some were cobblestone. In fact, one of our stops was to an almost finished bridge which stretched 11 miles from Nan’Ao to the mainland.

Finally, the people of China made it an experience I will never forget! Everywhere I went, I was the tallest and my bright blonde locks stuck out like no other. People took pictures no matter if I had my crown on or not and whether I knew it or not. Each person I encountered was very respectful and treated the whole Washington delegation like queens and kings. They take tradition very seriously and I was so grateful to experience several traditions like a tea ceremony, toasting at dinner and being greeted properly. 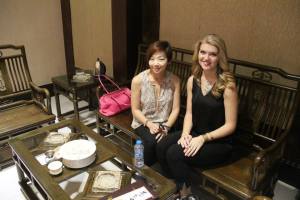 Overall I had an amazing time and I am so grateful for my time in China!